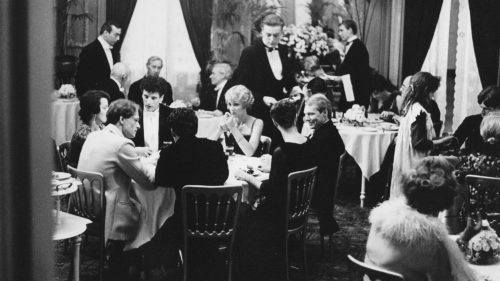 Logline:
With the book THE WAVES by Virginia Woolf as point of departure, the film follows six characters trying to recapture the feeling of harmony they knew as children. They meet each other in a restaurant at a farewell dinner for Percival, who is leaving for India. When he dies through an accident in India the group falls apart.

Synopsis:
The film is based on Virginia Woolf’s book “The Waves”(1931). The six main characters are constantly trying to recapture the feeling of harmony they knew as children. Through their thoughts the intensity of childhood, the optimism of youth and the disillusion of later years are portrayed.
Their perceptions and feelings move back and forth through the narrative like waves.
The presentation of the thoughts of these six characters, which cover their development from child to adult, is a challenge to confront one’s own life.
The central event in the film is a meeting of Bernard, Neville, Rhoda, Jinny, Susan and Louis at restaurant in London in 1920. They meet for dinner on the eve of Percival’s departure for India. In a sense Percival acts as a mirror in which each character sees his own ideal image. He himself remains a mysterious figure. Immediately after this dinner, which evokes harmony and happiness on various levels, they learn that Percival has been killed in a riding accident. His death marks the beginning of the decline of the group and of its individual members.
This is not the film of a book in the normal sense. Is images are inspired by the form of the novel, and it takes us on a voyage of discovery. Is moves from elements of the present towards the historical fiction, which is re-experienced in a way which is only possible in film. After the death of Percival it becomes clear that the carefully constructed fiction cannot survive and it collapses.
The illusion that life and reality are continuing stories in which events follow each other logically is lost.

this film is financially supported by:
Ministerie van WVC